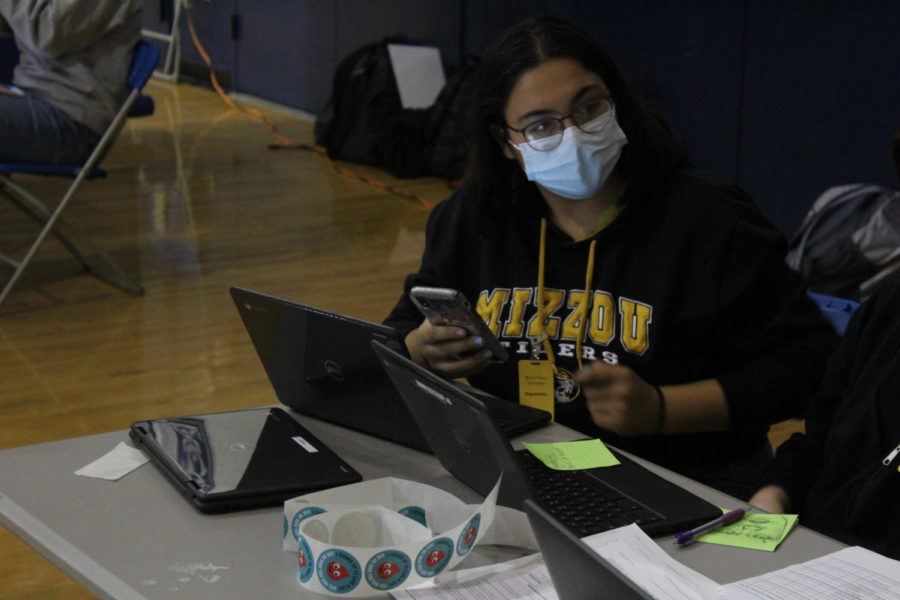 The St. Charles High School blood drive took place on Tuesday, Oct. 26, with the donation times lasting from 9a.m.-12:45p.m. and taking place in the main gym. The partner with StuCo for the blood drive is Mercy Hospital, which StuCo has partnered with in the past.

“So, we’ve partnered with Mercy Hospital in the past, to be able to do blood drives with the school…but with COVID, I know they’ve had a hard time being able to find donors, so one of the things we want to do in Student Council is really reach out to partnerships in the community to build positive relationships with community groups and members in St. Charles,” StuCo sponsor Skye Reichert said.

Originally, Key Club was supposed to do two blood drives this year, but StuCo ended up doing the blood drive instead.

Volunteering is a good way to get involved in school, and this rang true for freshman Ginessa Fields.

“I volunteered because I wanted to help people and I thought it would be a fun way to get more involved in Student Council. And, I don’t know, it seemed like a fun thing to do and to escort people to get out of class,” Fields said. “I am a runner, so I’m gonna go, get you out of class, tell you to get your ID, and bring it back here, and um, take it to the first station to paperwork.”

Mercy Hospital set a goal for StuCo for how much blood should be collected.

“So, our goal is set by Mercy Hospital staff, and our goal is 40 people, to have 40 people donate,” Reichert said.

Unfortunately, StuCo didn’t reach the goal for the blood drive, but they did get a lot of people to donate, even on such short notice.

“Honestly, donating any blood, I think is a success, getting people interested in it and wanting to come help out and get pretty good turnover of people, I think for having such short notice for the blood drive…we only had about a month to really get it going. We had… 20 to 30 people, that’s not an exact number… I think that’s a pretty good amount of people we had coming to get blood. I think they told us they wanted 40 people, so we didn’t get quite there. But we had a good amount of people, I think for St. Charles High, coming to give blood,” Holterman said.

The process for the blood drive was more complicated than it may have seemed.

“So, we have a list of student names and teacher names of people who have signed up to donate…we have a group of students who will be helping with that blood drive, so they each have different tasks to do throughout that day…one of the tasks is going to find the people who are participating in the blood drive, to be able to pull them out of class….bring them down to the gym to donate…for donors, the process would be coming down to the gym, they’ll get registered and checked in, with their photo ID, with their birthday, they’ll do a bit of medical background history, to make sure they’re feeling okay, COVID check to make sure they’re not exhibiting any symptoms…and then they will wait until there’s a bed available. They’ll do the blood donation…they’ll be in the gym another 15 minutes after they’re done donating,” Reichert said.

There were many different stations and jobs assigned to the volunteers who worked at the blood drive.

“…I think everyone had a really good experience. We all learned a lot from doing it because we had people volunteering at so many different stations getting to different stuff. I did a lot of the registration and other people helped to make sure people were feeling good before they went back to class,” Holterman said.

Many factors went into whether students could give blood or not. The qualifications were not only limited to medical conditions, but also age.

“I feel good about it. I’m sad that I’m not old enough to donate, but I would definitely donate when I am old enough, and I think it’ll be fun,” Fields said.

Even though StuCo didn’t reach its goal of 40 donors, it did reach Reichert’s definition of a successful blood drive.

“Since I’ve never done a blood drive before, I’m not really sure what my version of success is yet, I don’t know how achievable forty donors is for our school, and especially everyone…being back for the first time in a long time, nobody really knows what to expect anymore. I would say between 20 and 30 people donating to me would be a success. And then, of course, having nobody get sick or pass out, would definitely be a positive as well,” Reichert said.

Success seems dependent on student health for both staff and students.

“If everybody who signed up for it, got it, and came, and actually came in, and no one passed out,” Fields said.

Reichert feels that the blood drive was a positive experience overall, and the volunteers would agree.

“…I do think it’s a really great way for people to get involved, and help others who need it, and make sure we are supporting the people we help,” Reichert said.