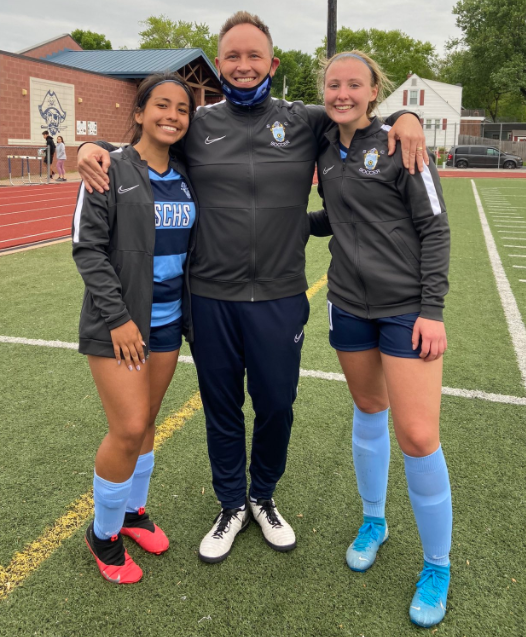 Seniors Bre and Domenica have finished the final soccer season as District champions. These two girls have helped their juniors a lot in practice to become a better team all together. Hollowell has played varsity soccer all four years of high school and Suraty has played varsity since last year but didn’t get to play until this year.

“They give us a sense of unity, they give us examples for the other players and how to carry themselves, examples as to how hard you should train and practice and with the choices they make outside of soccer they are just natural leaders for the team,” Head Coach Rodney Orrick said.

Since Hollowell and Suraty have been in soccer for so long Orrick has a lot of memories with them from practices and games. For Hollowell, Orrick will always remember her competitive spirit..

“After a game at Orchard Farm she pulled her shin guard down and had a bruise the size of a baseball.  She just patted it and continued to play through it the rest of the season,” said Orrick.

For Suraty, Orrick will remember her willingness to always put the team first, she is always counseling her teammates and supporting them in any way she can.

“One of her teammates was injured during practice and was visibly upset. She sat next to them for about 20 minutes on the bench and helped them through it with a conversation,” Orrick said.

The girls have a lot of accomplishments from over the years and some have a favorite.

“I think being able to show up every single day all four years without wanting to stop and being able to keep going through all of it, with COVID and all of that,” said Hollowell.

Hollowell doesn’t want the season to come to a close.

The girls also have favorite memories with the team and coaches.

“Most of them happen in team bonding and with our Coach Baez, she’s just really funny and Orrick with his dad jokes, it’s always a good time,” Suraty said.