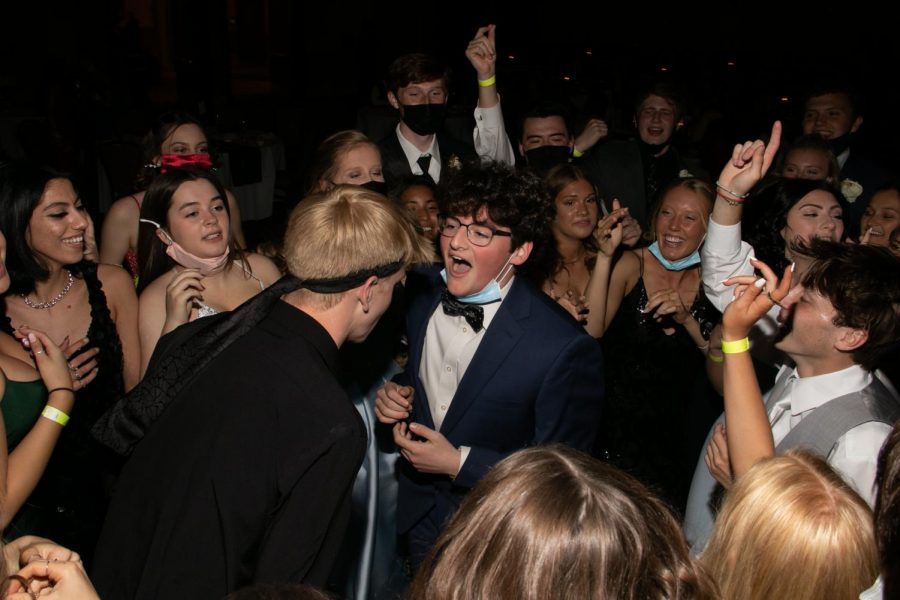 Ryan Bain and Aidan Doughty singing to each other.

In the most untraditional year, students were lucky enough to have at least one traditional event thanks to the Prom coordinators, Liz Laley and Daniele Munzer. Although there was a Prom, there were some untraditional aspects.

Some students wished their Prom had certain things that previous Prom’s had pre-Covid.

“Even though they were mandatory for a reason, no masks. I also wish outside guests were allowed to come,” said senior Ryan Russell.

Some other untraditional aspects of Prom were fewer people at tables, separated dance floors and while they did have a photo station, there was no photobooth.

“I wished we had a photobooth with props like my sister had at her Prom in 2019,” said Aidan Doughty.

The majority of the students loved the food. They started the students off with a garden salad and bread rolls. For the main course, the Alfredo, which was the most favored. Right next to that, Chicken Parmesan and green beans were also served. To end off the night, dessert was served as tiramisu.

“The Alfredo was my favorite part of the night. I just remember it being so good,” said Maddie Beerman.

At the end of the night, Prom King and Queen were announced. Brant Ragsdale and Maddie Beerman.

“I mean a lot of people told me they were going to vote for me so I wasn’t surprised I won Prom King but it was a cool feeling,” said Brant Ragsdale.

“I was surprised when they called my name, but it was exciting to be voted Prom Queen,” said Maddie Beerman.

Another highlight for most students was the dancing.

“Dancing with my friends was my favorite part. The song choices were immaculate, they got everyone to get up and make their way to the dance floor,” said Shai Miller.

“Yes, Dancing with class of ‘21 made the night,” said Ryan Russell.