"Joker" is a captivating, if not slightly unoriginal triumph 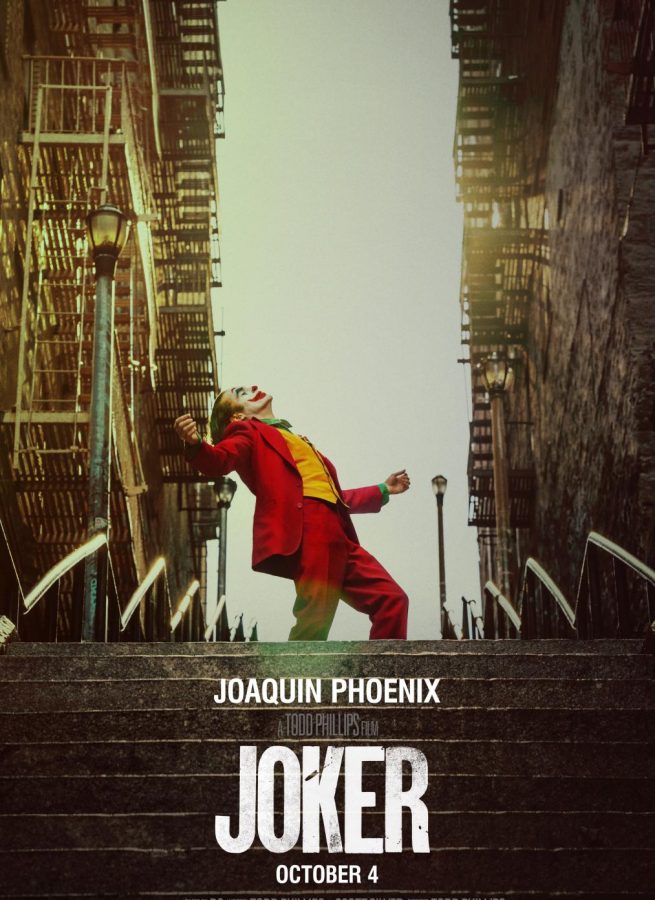 Directed by Todd Phillips and starring Joaquin Phoenix, Zazie Beets, and Robert De Niro, 2019’s Joker received a five-minute standing ovation and the “Best Film” award at the Venice Film Festival before its turbulent release, with marvelous scores from audiences, but mostly negative responses from critics. If you look up reviews online for the film, you’ll get a mixed bag accompanied by several analyses either touting its genius or adding more gasoline to the wildfire of controversy it garnered over the past few weeks.

Recently, film director Martin Scorcese has been under fire for criticizing the Marvel Cinematic Universe, which is ironic considering how Todd Phillips has managed to sneak his own Taxi Driver-lite narrative into theaters under the guise of a comic book movie. This film rides just over the line of homage and can at times be a bit distasteful with its several callbacks to Taxi Driver, even going as far as to have its own remix of De Niro’s “you talkin’ to me” scene. However, this, alongside a few minor problems with the script itself, is the film’s greatest drawback, and the rest is more or less masterful.

In Joker, Arthur Fleck is a hired clown living with his ill mother, Penny. However, the rapidly-changing socio-political climate of Gotham, mysterious circumstances surrounding his past, and his attachment towards a pipe dream of becoming a stand up comedian shape Arthur into the Joker we know and love. Some people criticize the movie for giving the famous supervillain a backstory when, in most cases, the character prefers a purposefully vague, multiple-choice past. However, when you watch this film in the context that this could be just one of the Joker’s made up backstories or answers to how he “got these scars”, the film becomes much more enjoyable and its ambiguous moments become more enthralling to dissect. There is a slight hindrance to this in that the subtext only goes so far and there is a serious lack of an arc for the narrative’s message, but what it’s able to properly say, it says beautifully.

Of course, the most notable achievement of the film is Joaquin Phoenix’s portrayal of Arthur Fleck, an overmedicated outsider who seems to always have a target on his back. For most people, if you’ve seen any movie about this type of character, you know which paths the story will take, but Phoenix manages to perfectly capture a man whose circumstances engender sympathy, but whose actions engender vilification. It’s surprising when you find yourself wanting this character to not make these bad decisions and to seek help for his afflictions despite the general excitement towards the infamous villain that he will eventually become. We, as an audience, want to see the Joker, but don’t want Arthur Fleck to become him. It’s a tightrope that Phoenix traverses with virtuoso-like aplomb, in a performance that rivals Nicholson and Ledger’s portrayal of the Joker. And seeing how Ledger’s performance won him a posthumous “Best Supporting Actor” Academy Award, Phoenix’s performance in this film will be a popular topic for this Oscar season.

Other noteworthy accomplishments include the score by Hildur Guðnadóttir and the cinematography by Lawrence Sher. It’d be more than difficult to immerse yourself into the inner workings of the clown prince of crime without Hildur’s haunting soundtrack behind it. In fact, in some scenes, it’s the film’s best facet, especially so in the climax. After everything ramps up to an epic ending, we do end up seeing the Joker in action. However, if the climax wasn’t acted impeccably, the entire experience would have come off as gaudy and slightly obvious, but with Phoenix and De Niro giving a lasting performance, it gives the film a satisfying, tense payoff. In short, Joker is one of the best films of the year and while it’s rough around the edges, it stands as greater than the sum of its parts. If you’re expecting an over-the-top action flick, you might be disappointed, but you will be treated to a slow-burning character study involving questions of socio-political shifts and mental illness.