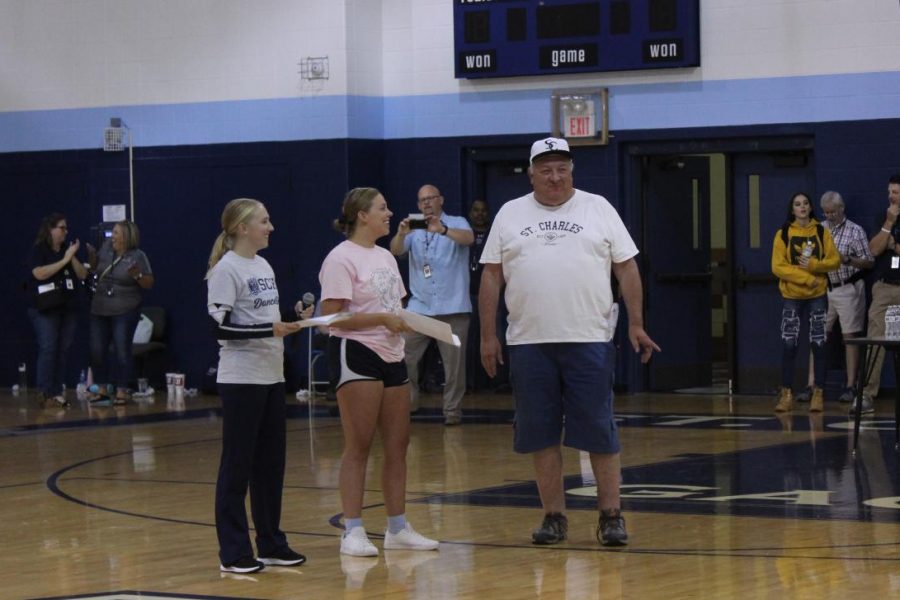 Charlie Meeker, a former teacher who worked here for 33 years at St. Charles High School before finally retiring, dedicated himself to his work and his students. But after his retirement, he has been dearly missed by his students and co-workers. So StuCo sponsors Tori Ramsey and Jacob Holtgraewe knew that Meeker would be the perfect Grand Marshall for the Homecoming Parade, which he was on Sept. 20.

“So every year, we choose a Grand Marshall that has had a lasting impact on the community whether that be someone that worked at St. Charles High School, someone who is a community leader or member, or someone who has been a graduate of St. Charles High School. We try to find somebody that is a perfect demonstration of what it means to be a community leader,” Holtgraewe said. “And we believe that Charlie Meeker was the perfect representation of that. He has been coaching and teaching for all these years and in his first year of retirement we thought that nothing was better than to be able to honor a man who has taken so much of his time and effort to help all those around him.”

Holtgraewe also said that students who knew Meeker were excited that he was going to be the Grand Marshall.

“Whether it be students or his athletes through the years, it was a great opportunity to honor a man who is selfless in everything that he does,” Holtgraewe said.

Ramsey felt the timing was right.

“We especially wanted to honor him while we still had students that were his students who had him as a teacher and as a coach, to make it even more special,” Ransey said. “But he spent more time than most people spend at one place influencing people’s lives and making people happy.”

After being asked to be Grand Marshall, Meeker said that he felt proud to be part of the tradition at St. Charles High.

“It was an honor, really. I respect the tradition and pride that goes with being involved at St. Charles High School. I felt honored and humbled,” Meeker said.

Meeker also said that he felt grateful for being the Grand Marshall and was glad the experience was memorable.

“The welcome I experienced was memorable, thanks to all for the privilege.”