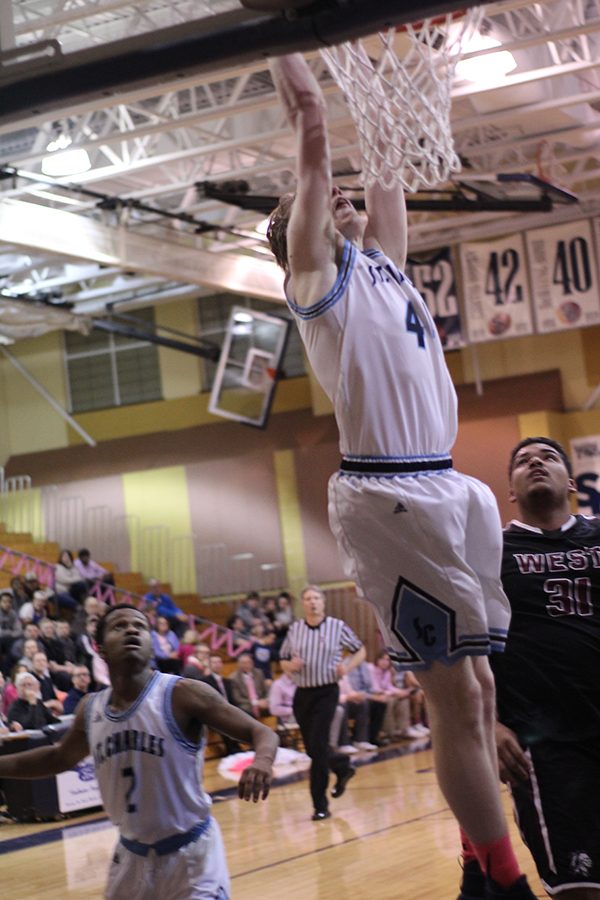 Senior Codi Whitlock rises up fr one of his two dunks during his team's 64-47 win over St. Charles West.

The 2016 Turkey Bowl ended the night with all four of St. Charles’ basketball teams winning over St. Charles West. A lot has changed the past three months for all of the teams, but the Pirates wanted to make a big statement over their crosstown rivals. Going into these games, the girls team was sitting at 16-5, and had won third place in the Troy Buchanan and MICDS tournaments earlier on in their season. As for the boys, they were 14-8 ever since starting out hot winning their first eight games, they also got third at the Washington tournament during January.

Excited for their final regular season meetings with St. Charles West, some of the players could not wait to play them at home.

“Playing West is a big deal, but we had to protect our home court. It was a big conference game,” senior Jordan Dowdall said.

The JV girls, like the Turkey Bowl, took care of business over their opponent by winning 46-29. The JV boys, however, went down to the wire again. After one of High’s players, freshman Sam Adams, got a technical foul, which was also his fifth, the game seemed to get out of the Pirates’ hands. But they mounted a comeback late in the fourth quarter, which ultimately came down to the final seconds of the game. Chase Spearman, a freshman brought up halfway through the season, was fouled on a layup, and converted on the shot with 1.4 seconds left to give his team a one point lead.

“I drifted to the corner, and when the ball hit my hands, I knew I just had to drive,” Spearman said. “It felt great, we all wanted to win that game so bad.”

Although he failed to hit the rim on the intentionally missed free throw, the Pirates were able to save game and claim the victory over the Warriors 49-48.

Varsity girls went into their game last Friday with the same plan as Turkey Bowl: stop St. Charles West’s Emma Poindexter. The senior guard is averaging 17 points per game, and does it all for her team.

“We wanted to come out strong and run them up and down the court, keep pushing the pace of the game,” senior Molly Schultehenrich said. Schultehenrich would finish the night with 13 points including four 3-pointers.

Although Poindexter did score 22 points (over 50 percent of her team’s points), the Lady Pirates got the job done by winning 60-37.

“It was fantastic, especially to win like we did,” senior Taylor Lyles said. “Kind of bittersweet to realize that this could very easily be the last time we ever play them.”

Senior Tanisha Wilson played both sides of the court, and finished the night with a double-double of 18 points and 14 rebounds, and four blocks as well.

“I started off slow at first, after halftime I started picking things up,” Wilson said. “I just starting getting all this energy playing our rival team. It was great knowing I played my best against a team I may never play again.”

The final game of the night was the varsity boys game, and their first half was one for the ages. The Pirates outscored the Warriors by 17 including a buzzer beating 3-pointer by junior Micah Hughes going into halftime. The team also did a great job of containing the Warriors’ leading scorer sophomore Josh Anderson.

The next half was a different story, Anderson would foul out during the fourth quarter but his teammates would try their best to keep the Warriors in the game. Senior Codi Whitlock tried to keep the momentum shifted towards High as he drove in for an emphatic dunk. But sophomore Trent Champagne and junior Nick Bazzell for St. Charles West combined for three 3-pointers in the fourth quarter to give a couple scares to the Pirates. But senior Drew Cannon helped seal the deal by hitting two free throws, adding to his 15 points, and the varsity boys won the game 64-47, completing the second four-game sweep over St. Charles West.

“It’s always good sweeping West, showing them that this is our house,” Cannon said.

And not only was there competition on the court, the spectators got competitive as well. During the halftime of the varsity boys’ game, the girls team did a “miracle minute” to raise money for breast cancer research. The Pirate side would donate $489 to the Warriors’ sides $147 for a total of $636 in 60 seconds. The miracle minute was set up for the Lady Pirates’ manager senior Breanne Martin, whose mother is currently battling breast cancer.

“I didn’t have anything to say but ‘thank you’,” Martin said. “It was a huge blessing to our family, and I’m thankful for everyone who has helped us through this.”

After the games concluded, Raising Cane’s in University Commons hosted a promotion for both schools that 15 percent of the sales made that night by the students who purchased food would go to each school. And whichever school had more sales would get double. High also dominated this as they won in a landslide over West.