Orchestra has their first concert of the year 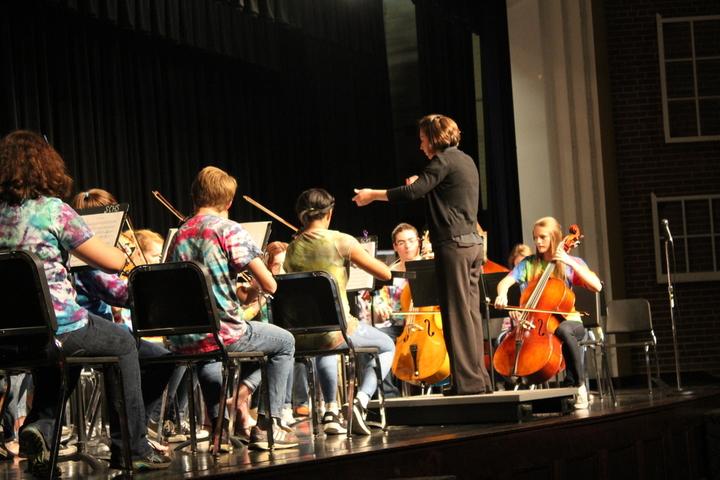 The Orchestra had their first concert on Thursday,  Oct. 14. The entirety of the Orchestra is split between two classes, one for mostly underclassmen, and the other for upperclassmen. Despite the age differences, they played two pieces together and had a few of the same members.

“Every year, we do a theme for the first concert,” senior Carolyn Fortenberry said, “But, there wasn’t really a theme that tied together with the songs. So, it was between tie dye and Hawaiian, and tie dye provided a bonding opportunity.”

The two classes rarely get to see each other so the tee shirt creation night was an opportunity to meet and bond. The theme seemed to be subtle or non-existent where in actuality it was deeper. Both groups came back up to school on an afternoon and brought tee shirts and spent their time visiting and having fun.

“The orchestras played songs together, so the bonding opportunity brought us closer,” senior Karen Ye said.

The night started with students, such as senior Damian Hawes, setting up the sound equipment and lighting. The Concert Orchestra, or underclassmen orchestra, took the stage with junior Jarrett Ball as the emcee, or Master of Ceremonies, to entertain between songs and classes. The Concert Orchestra first performed “Ablaze” by Chris M. Bernotas and “The Harmonious Blacksmith Suite” by Handel. Both pieces filled the room.

The Symphonic Orchestra came onto the stage next with a few musicians from the previous staying. Senior Tayonnie Granberry took the first chair and the solos. Part of first chair means that in the beginning, everyone tunes to her. The group played “Romanian Waltz” by Ion Ivanovici and “Moods” by Bela Bartok.  The piece “Moods” had three songs within it; “Joy”, “Sadness”, and “Festive.” Each part flowed together very well.

The orchestras together melded in an amazing way when the Concert class joined the stage again. Once together, senior Karen Ye took the first chair and solos for these pieces. The two classes started with “The Magic of Harry Potter”  arranged by Michael Story and left the crowd speechless. They ended the night with “The Westward Expansion and Jubilee” by Carrie Lane Gruselle. The two pieces made it obvious that the groups had bonded extremely well.

“I really enjoy going to the concerts,” Hawes said. “It’s cool to go and listen to the music.”